The tone for Lila Cerullo and Elena Greco’s lifelong friendship is set when they first play with dolls together in the courtyard of their apartment building. Lila, who is known to teachers, adults, and children alike for being impulsive and destructive but incredibly intelligent, throws Elena’s doll through grates into the darkness of an apartment building’s cellar. Introverted Elena, betrayed but intrigued, retaliates by also throwing Lila’s doll into the cellar. “Whatever you do, I do,” she intones seriously. This phrase becomes a kind of mantra for friends, as their complicated, competitive friendship develops.

Narrated by an adult Elena in the present day, My Brilliant Friend, a miniseries adaptation of the first in a tetralogy of novels by pseudonymous author Elena Ferrante, follows Elena and Lila’s coming of age in poverty-stricken post World War II Naples. Elena is prompted to tell their story against Lila’s wishes after Lila erases all traces of herself and disappears. Elena begins their story with audible bitterness, typing, “you always overdid it, Lila, when we were kids and now that we’re old.” With that introduction, the viewers are transported back to their childhood days, when the two, the smartest students in their elementary school, originally become fascinated with each other and begin their friendship in earnest. 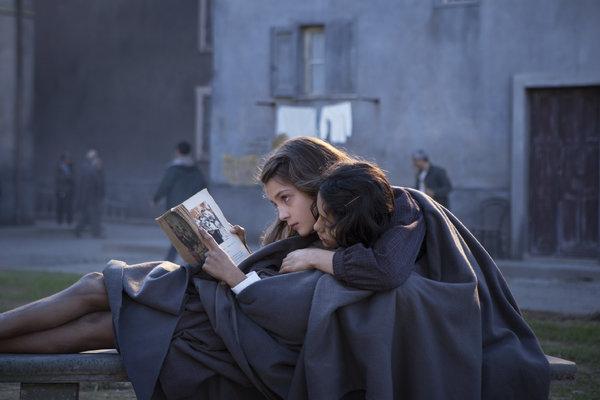 My Brilliant Friend documents the push-and-pull quality of their friendship throughout their adolescence. Both girls are equally admired and jealous of one another; Lila envies Elena’s ability to continue her studies beyond the typical stopping point of elementary school, and Elena is jealous of Lila’s ability to be the best at everything she does, from her ability to pick up other languages with ease to shoe design. Because they are unable to articulate these jealousies to the other, they fall in and out of being best friends. They are drawn to one another because they both recognize the desire in one another to escape their quotidian lives in Naples that are dominated by violence and banality.

Elena and Lila are played with a rare viscerality by previously unknown child and teen actors. Ludovica Nasti’s performance as the young Lila crackles with energy, and Elisa Del Genio plays young Elena as reserved without being swallowed up by the screen. Their teen counterparts, Gaia Girace as Lila and Margherita Mazzucco as Elena, carry over these traits; Girace is a ferocious Lila, and Mazzucco is quietly brilliant.

Mazzucco and Girace as teenage Elena and Lila, respectively

Having the perfect cast of girls is incredibly important for this show, because, more than anything, the centralizing theme of My Brilliant Friend is its precise study of women’s rage—how it can be internalized, how it manifests, how it is dismissed, and how long it can last. Violence permeates the show; each episode has a moment of men fighting in the neighborhood streets, or men beating their wives and children. These moments, while not dismissed, are considered by Elena and Lila to be commonplace. What sits with Elena is moments of rage from women, and in particular, how it never seems to go away, festering like a wound. A “mad widow” in their neighborhood wages constant battle with other women, fighting them in the stairwell of the apartment building or purposively dirtying another woman’s laundry. Even in her narration, Elena is disgusted by this behavior but does not seem to recognize that she is also holding on to pent-up rage—rage that manifests in writing out the story of Lila’s life when she was asked not to.

Translating a novel that focuses on interiority to the screen can be difficult, but My Brilliant Friend’s strength is its ability to show, not tell. The novel deals heavily in its characters’ interiority—how emotions like jealousy, love, and rage and socio-political, economic, and cultural norms are internalized by these women. Adult Elena’s narration is not used only as a way to provide the viewer exposition, rather, it enhances what is seen on screen. Delicate moments that could be used solely to provide colorful details become the focus and give the show it’s lived-in feeling. Every single character, including minor characters like Lila’s mother and the girls’ neighborhood friends, feels fleshed out, full of desire and anger.

My Brilliant Friend is both a beautiful visual supplement to Ferrante’s novel, but also a gorgeous piece of television art that stands on its own.

My Brilliant Friend, in Italian and Neapolitan dialect with English subtitles, is now available on HBO and streaming on HBO Go.

Writer based in Atlanta, Georgia.

‘Betty’ Season 1, Episode 3: “Happy Birthday, Tyler” Review – The All-Girl Skaters Have Each Other’s Back, No Matter What

‘Betty’ Season 1, Episode 2: “Zen and the Art of Skateboarding” Review – The Bumpy Route From The Lens of Female Skateboarders

‘Capone’ Review: Isolate With Al For Some Shallow, Deranged Fun