Imagine a wasteland. Civilization has ceased to exist. People are killed over resources that are vital to the post-apocalyptic economy: water, food, and gasoline. Cars are now war machines, scantily clad biker gangs are maniac bandits, and people band as tribes to live just a little bit longer in the desert. This is Mad Max 2: The Road Warrior, the sequel to the Australian indie hit from 1979. George Miller, armed with a bigger budget and a strong directorial debut, forces more ambition and action into this film. Although the storytelling may suffer for it, the sheer creativity in production design and action set pieces made a huge imprint on film in general. 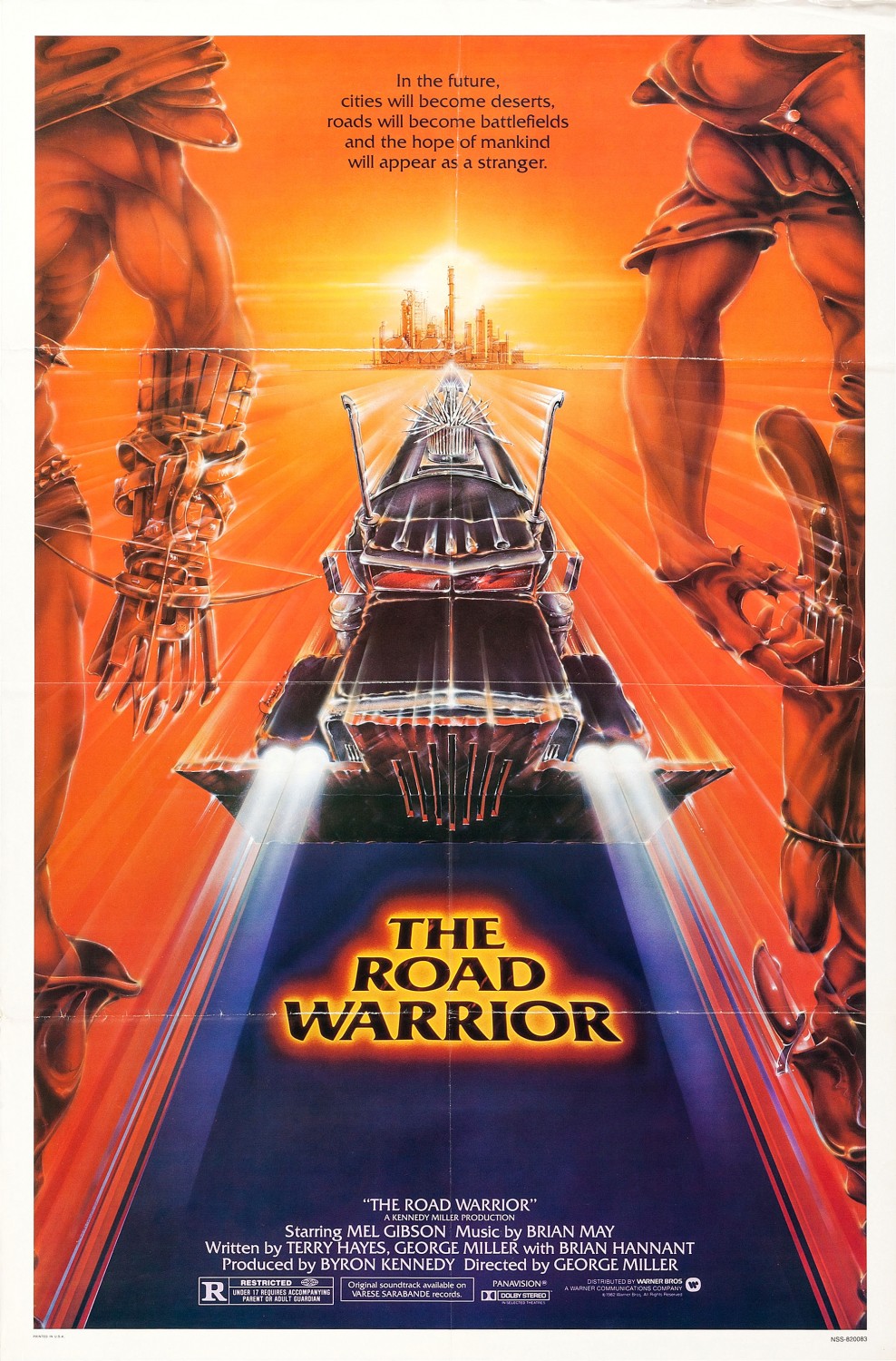 The first thing to note about this sequel is it’s a huge departure from the first entry. They have more capabilities in this film with the budget so they can go fully post-apocalyptic and fully eccentric. Although it may not feel like a proper sequel, to me this is the best kind of sequel. Sequels are often shoehorned continuations of the last film’s plot. Some loose end or contrived plot device just reignites everything from last time and meanwhile the audience is just sitting there thinking, “Ugh, not again”. Mad Max 2, and sequels like it, take the characters you love and give them another adventure or plot to go on. The disconnect from either film’s plots gives them each the freedom to do whatever they want within the world of the series. And boy, what a world this is.

The Road Warrior is designed with such detail and culture that it’s fascinating to watch. The premise of “car-based post-apocalypse” movie sounds ridiculous, but the effort and interest put into constructing these sets and costumes and cars sells us. The first time we see Lord Humungus, for example, you are not laughing at him. His massive car and his odd costume and his stringy hair blowing out of his mask construct an intimidating and menacing image. Not overwhelmingly so, but the little intimidation that’s there is impressive considering the aesthetic of the movie. The design is also not just cosmetic. Everything has an explicable reason for being there within the lore of the film. Some things function as survival tools, others as status symbols. In the fight scenes especially, the way the cars are constructed allows for some fantastic choreography from car to car.

The action is another feat of this movie. In my review of Mad Max, I mention creativity that was barely there due to the indie budget. Here they go full throttle into car fight choreography with that now blazing creativity. Nothing feels stunted or scripted. Everything is exciting and dangerous, and it is a blast to watch. The climactic scene in the oil tanker showcases the design, the stunts, and the action fantastically well. The editing also is tight, fast, and propelling. One second a bomb is thrown and a car is wiped off the road, but we can’t rest on that because two more cars are approaching the tanker and the scene keeps adding. It’s one of the best action sequences to take place on wheels. There isn’t wall to wall action, it takes some moments for story and plot, but when it is there it is awesome.

The story stays simple for the most part. This movie’s main goal is the action and world, so there is no convolution in drama or anything like that. There is a goal: a gasoline tanker, and both sides want it. That’s all you need as the frame, and the film knows it. The acting is much more character-based now. The first movie had grounded characters but now that the world has gone mad, the actors are truly more characters than anything else.

Max is the rock of this movie, and he’s a smart and reluctant hero, played as such by Mel Gibson. The trauma of the last movie doesn’t really seem to be a problem, but he’s still kind of an unhinged dude. The villains are all insane and fun; Wez (Vernon Wells) is the most insane and fun. Max’s sidekicks, the Feral Child and the Gyro Captain, to me are a bit annoying, but luckily this movie gives them opportunities to make it up in action scenes, which they do.

Overall this huge departure ended up defining the series for a reason. The world of The Road Warrior isn’t one to be forgotten easily. The action is exciting and everything aids this action, making it the centerpiece of the film. The story kind of goes to the wayside, a knock against it compared to it’s predecessor, but the explosions and cars were impressive enough for me not to care that much.

The Politics of a Dying World in ‘Mad Max: Fury Road’

The Good, the Bad, the Weird: the Fantastic Land of Manchuria