After you watch every single Friday the 13th film ever released, you start to ask yourself a few questions:

I will explore a lot of this in a more in-depth analysis of the franchise and the overall state of horror films next week, but for now I want to just shake off a few of these demons and take a look at what the franchise is best known for: cheap kills and schlocky thrills.

I chopped this franchise into sections: the first five or so were actually really fun watches, at least attempting to explore some interesting characters and ideas. Then the films descended into a bit of a mess. Don’t get me wrong, there are some genuine hidden gems in the later films, and there did seem to be an almost meta state the franchise got to by Jason X. It was aware of the absurdity and was maybe playing with this idea with the viewer, or maybe that was the exhaustion of my mental state at 1 A.M. watching Jason X…

Anyhow, Friday the 13th is known for its bloody kills and over the top violence.  I do not see the violence as cheap, like many critics do, but I find some genuine value in Jason, or whoever the killer’s, victims are. There is something to be said about which characters are killed and in what way. Some of the deaths have some real thought put behind it, while others… not so much. I think a lot of these 80s slasher films are underrated and overlooked in how truly subversive they are as far as exploring the state of the culture and worries and issues of the time, from promiscuous teens to mental health. In this not-so-comprehensive and way too biased list, I won’t just be looking at the smart kills, but what kills stood out to me as either, smart, great, or just bloody fun. With that said, let’s take a look at 13 of the franchise’s most fun and fantastic kills.

#13: These people are screwed 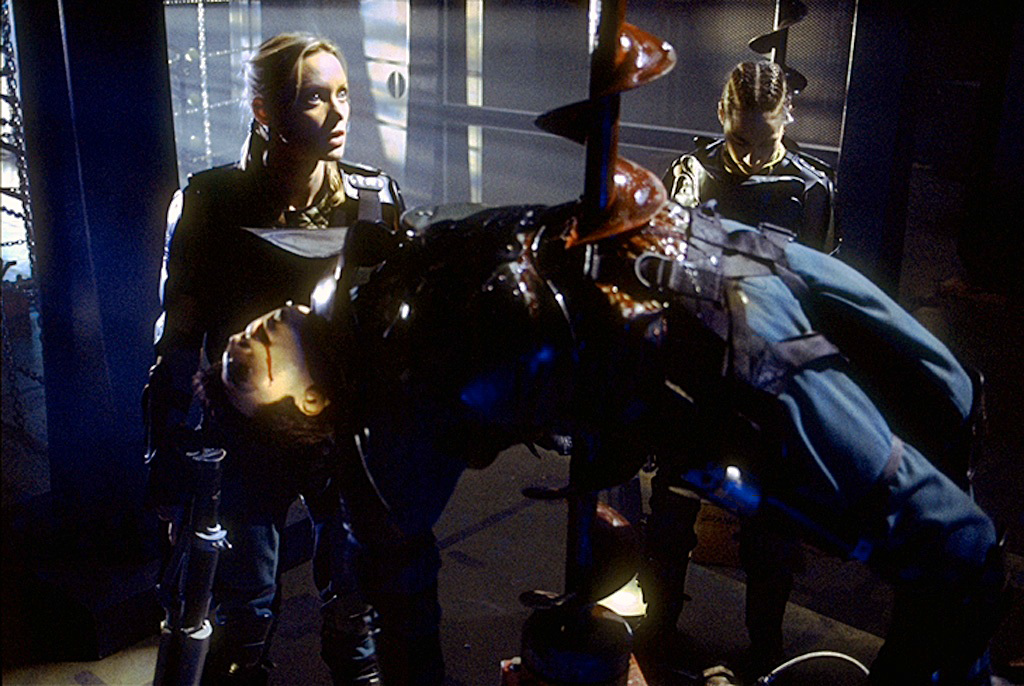 This was such a memorable moment from an otherwise unmemorable movie. I just had to include it.

from Friday the 13th Part VII: The New Blood

I didn’t even understand this when I saw it. It really just left me speechless.

Taking full advantage of those 80’s 3-D effects. Actually, before this, there was a really wonderful scene where the final girl stands off in false safety while the boyfriend is literally being strangled in front of her. Chilling and creepy.

from Friday the 13th Part II

A classic couple of slasher film victims. This one is great because who doesn’t love some good double killing?

Taking a spot just above, of course, is a triple kill, but really, aren’t we all wondering how and when Jason started climbing trees?

from Friday the 13th Part VII: The New Blood

At this point, Jason is just showing off. Straight up punching a dude in the chest? Savage.

In one of the most iconic openings in the whole franchise, this scene took the last kill a step further and sent the kid straight to the grave. No sad, lonely bleed out this time. Into the hole you go, buddy. I am still shaken from the opening of part VI.

#6: He won’t be opening any wine bottles for a while

from Friday the 13th IV: The Final Chapter

The poor dude just wanted some wine and this is what he gets?

from Friday the 13th

So this is one of my favorite kills and the first film does this a lot with a number of their characters. Earlier in the film, this teen has a close call at the archery range. It is just good writing to have this place be her final resting place. This moment is also creepy and scary, as she is alone and in the rain. So much confusion and fear stems from this scene.

from Friday the 13th Part VIII

I had to include this one for a number of reasons. Part VIII was a point where the series left the ‘campy’ and just went for full fun. This kill is so over the top and so absurd it’s almost surreal. Almost.

#3: One degree of Kevin Bacon

from Friday the 13th

The Friday the 13th star. Whether you look at his dive into the water (go back and watch it. Iconic diving from the Baconator), or his speedo, that scene is great. His kill is no less forgettable.

from Friday the 13th Part II

This whole sequence is actually one of my favorite moments in the entire film. It is so engaging and powerful it almost feels like it doesn’t deserve to be in this film, but here it is, in one of the best openings in the franchise. But, seriously, can we also talk about how she never gets to finish her tea?

I had to put this at the top for a couple of reasons. Aside from it being one of the most gruesome and horrible deaths, it is actually the franchise’s first look at Jason in the hockey mask. Having seen this a few times now, I cheer once this kill happens because I know the franchise only gets better from here.

And that about does it. Only thirteen of the best kills from the franchise. I hope you enjoyed my list, but if you feel like I missed a good kill or two, let me know.