The Night of the Hunter was renowned British actor Charles Laughton’s first and only undertaking as a film director. Met with indifference upon initial release in 1955, the film is now considered a landmark of American cinema. The unique fusion of chilling visual poetry, macabre screenwriting, and a razor-sharp sense of humor often bastardize the film, leaving it virtually impossible to classify. This versatility results in many tragic omissions, most notably in conversations regarding the film’s significance to the history of the horror genre. 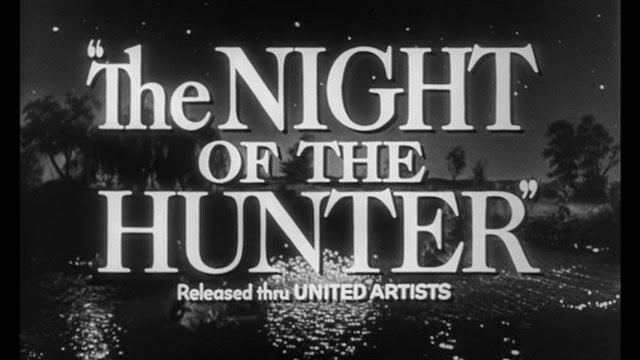 The film begins with a cautionary monologue. Silent movie veteran Lillian Gish tenderly quotes Christian scripture to a line of wide-eyed children. She warns of false prophets, wolves in sheep’s clothing, seeking to defile the pure of heart. This scene cuts to a nameless band of young boys discovering a murder victim, undoubtedly framing the tale as one of true evil and innocence lost. Laughton’s poised direction and the deep-shadowed frames of cinematographer Stanley Cortez create a narrative realm that ventures from any general sense of realism without straying too far toward the fantastic. The filmmakers establish a timelessness of setting and story. They show us that fear is a pervasive, infinite emotion that plagues living things across all of existence. This is horror with immersive focus and strength.

Set designs in The Night of the Hunter seem to be loosely inspired by the horror phenomena that shocked audiences decades prior.  In many wide angle shots—such as the eerily sexy bedroom scene where Robert Mitchum’s Harry Powell raises a skinny blade over his new wife or his nerve-shredding descent into the cellar with the trembling children in tow—the lighting is reminiscent of German expressionist classics like The Cabinet of Doctor Caligari or Nosferatu.  The intricate, Gothic details found in the river sets and interior scenes summon memories of the great Universal monsters. There are moments when Harry Powell stands narrow and taut, his head tilted like Max Schreck as Count Orlok. He is a manipulative, silver-tongued demon like Dracula and even lumbers with outstretched arms in a few sequences, grunting and snarling like Frankenstein’s monster.

Imprints of past horror cinema are richly displayed in The Night of the Hunter, but its relation to the future of the genre is just as evident. Many rehashed plot devices used in the film would later be augmented in future horror stories. One dominant example is that of a relentless protagonist battling a comparably inspired form of evil. Young John Harper’s father, Ben, is guilty of murder and armed robbery. Before his arrest, he entrusts $10,000 to John and demands he tell no one.  John swears to keep the secret and vows to look after his pig-tailed sister, Pearl, whom he protects with undying devotion. Evil Reverend Powell is Ben’s cellmate and sniffs wind that the money may be hidden among John and Pearl. Ben is executed, and Harry is eventually released. He tracks down the grieving Harper clan with intent to marry John’s mother (the great Shelly Winters as Willa Harper). John is not fooled by Powell’s façade and his doubts pave the way for a tense confrontation.

The charismatic villain foreshadows his entanglement with John, using his knuckle tattoos as stand-ins. With “LOVE” on his right hand and “HATE” on the left, he weaves his fingers together and rolls his wrists, telling the tale of virtuous love wrestling with disgusting hate. Hate seems to have the upper hand but is finally defeated, struck down by love. This ageless clash is portrayed in future fan-crazed horror franchises many times over. Nancy Thompson is a wise, ethical heroine fending off Freddy Krueger, the Scarred Prince of Bad Dreams in A Nightmare on Elm Street. Laurie Strode is a virgin bookworm and babysitter terrorized by a shadow dweller named Michael Myers in Halloween. Audiences salivate for these stories because the idea of good versus evil is incredibly malleable and transcends film entirely, luring us in again and again.

If the main plot seems a weak plea for the film’s horror merit, simply take a closer look at the characterization of the central villain. He owns a distinct appearance and a trademark weapon like numerous well-known horror icons. Freddy Krueger wears a striped sweater, fedora, and razor glove. Leatherface dons human skin and wields a growling, blood-splattered chainsaw. Michael Myers has his chef knife and Captain Kirk mask. In The Night of the Hunter, Powell’s ghoulish preacher outfit and aforementioned knuckle tattoos make him an unforgettable nightmare. He operates with ferocious vitality and carries a signature switchblade referred to as his “sword” as if it beams with horrible righteousness.

Powell’s peculiar personality skews him toward something more than serial killer. His behavior suggests schizophrenia. He gazes to the heavens and barks in a heightened tone like he knows God is listening, then suddenly turns and mutters his words in a gurgling Devil baritone.  His character is magnetic and his acts are so vile that he ceremoniously takes center stage like many horror icons often do.  Once we know the true measure of evil, the villain becomes the most alluring part of the story. If this film had a sequel (which would be highly unnecessary), Powell would be the driving force. Think Chucky from the Child’s Play franchise or Norman Bates in Psycho. Although Hitchcock’s film would go on to obtain recognition for creating the slasher subgenre, there is an undeniable shine of Harry Powell in the sweet smile of Norman Bates captured on film only five years after The Night of the Hunter.

A brilliant screenplay is essentially responsible for the film’s gripping suspense. Over the years, many webs have spun over who deserves the majority of writing credits, but James Agee was originally billed with adapting Davis Grubb’s novel, which was based on a true killer of women and children. Many great horror films were inspired by crimes of serial murderers such as Ed Gein with The Texas Chainsaw Massacre or Ted Bundy in The Silence of the Lambs. In tweaking these real life horror stories, writers reach a realistic level of fear that dwells long after the film ends, haunting audiences with feelings of filth and violation. Agee’s script is no different. It cuts deep and leaves dreadful scars.

The Night of the Hunter deserves to rank alongside great films like Psycho or Halloween as horror elite. With a plot driven by lingering dread and a delightfully unhinged performance by Mitchum, it’s due time to acknowledge a firm position for this classic within the genre. But don’t let me make such a claim—instead allow the film to speak for itself via its unnerving use of imagery and dialogue. The scene where Powell tilts his head toward Pearl and coos, “Don’t touch my knife, little lamb. That makes me mad, that makes me very mad,” comes to mind. He also growls a great line as he holds his blade over John’s ear and demands the location of the stolen cash. “Speak or I’ll cut your throat and leave you to drip like a hog up at butchering time,” he says. Ultimately, the definitive example emerges from a minor character. The entire moment blares with Faulknerian influence. A kind widower named Birdie Steptoe, known affectionately to John as Uncle Birdie, stumbles upon what becomes the most gut-wrenching shot of the entire film—a slashed victim, bound underwater in the front seat of a Model-T Ford. Old Uncle Birdie describes the horror to a photograph of his wife as if she were alive to listen. “She was down there in the deep place, with her hair waving soft and lazy like meadow grass under floodwater, and that slit in her throat like she had an extra mouth.”

Criterion Spotlight: 60 Years Later ‘Some Like It Hot’ Still Stands the Test of Time

Yuppies of the 1980s: The Dawn of the ‘American Psycho’