Not to sound melodramatic, but this summer was lacking in the “wonder” department. My heart was feeling a childhood nostalgic pull for grander worlds and unseen stories that usually lie in the fantasy genre. It was during this introspection that I realized a part of me was recalling some fond leftover memories from the Jim Henson Company’s 1982 cult-classic The Dark Crystal. I missed its world-building, sweeping landscapes, and an overall appreciation of children movies that embrace joy as well as terror.

The Dark Crystal: The Age of Resistance, a 10 part prequel series produced by Netflix and the beloved puppet company led by Henson’s daughter, Lisa Henson — captures the essence of the original movie. The new series expands on its grim, fantastical lore with a well-developed universe and a timely storyline. Accompanied by a gorgeous production — that itself alone is worth the watch.

All ten episodes, directed by Louis Leterrier, are set in the world of Thra — focusing on the intertwining storylines of three young heroes: soldier Rian (Taron Egerton), princess Brea (Alice Dinnean), and outsider Deet (Nathalie Emmanuel). All three belong to a race of creatures called Gelflings — an elf-like race that lives unknowingly oppressed by the rule of a large, vulture-like species called Skeksis that desperately want to live forever. With the crystal (Thra’s power source) and some astonishingly nefarious plots, the three Gelflings strive to turn their society and its deep-rooted beliefs around.

Familiarity with the original movie’s premise makes one wonder if this prequel series is all moot, but even as the new television series ties its characters and their stakes to a maybe foregone conclusion, the embrace of its current complexity and development makes it engaging. With multiple books about the world of Thra, there is plenty for Netflix/Leterrier to work with. Age of Resistance takes its time in cultivating its world with lengthy episodes, from establishing clan politics to little fun details of the gadgets the Skeksis utilize. The runtime — a little more than 45 minutes with an hour-long pilot — allows the series to spin a heavy journey, but there are also long stretches of the characters messing around that can make one lose their attention.

The main voice work is filled with notable stars that do well to establish the innocence and eagerness of its hero cast. Emmanuel’s Deet is a sweet highlight. The fun, however, comes from the Skerlisis’s scratching, loud, abashedly evil cackles (their voices include Benedict Wong, Mark Hamill, Keegan Michael Key, Simon Pegg, Andy Samberg, Awkwafina, and more.) The Skerlisis jump the line of comedy and horror pretty much every other second — from hammy and gross to deeply unsettling. There are scenes that become nightmarish, violent, and explicit without toeing the line of being gratuitous gore. (Even if sometimes they do take up a lot of that runtime.) There is torture, complicity in the face of resistance, creepy spider things: things gets heavy and earn some gasps.

The show embraces its old-school origins, relying on the structure of classic fantasy stories. Just as the original shared its production with Star Wars, the new series will remind audiences of the first trilogy. This might be off-putting for some viewers as it would have been better seen in slightly tighter episodes. 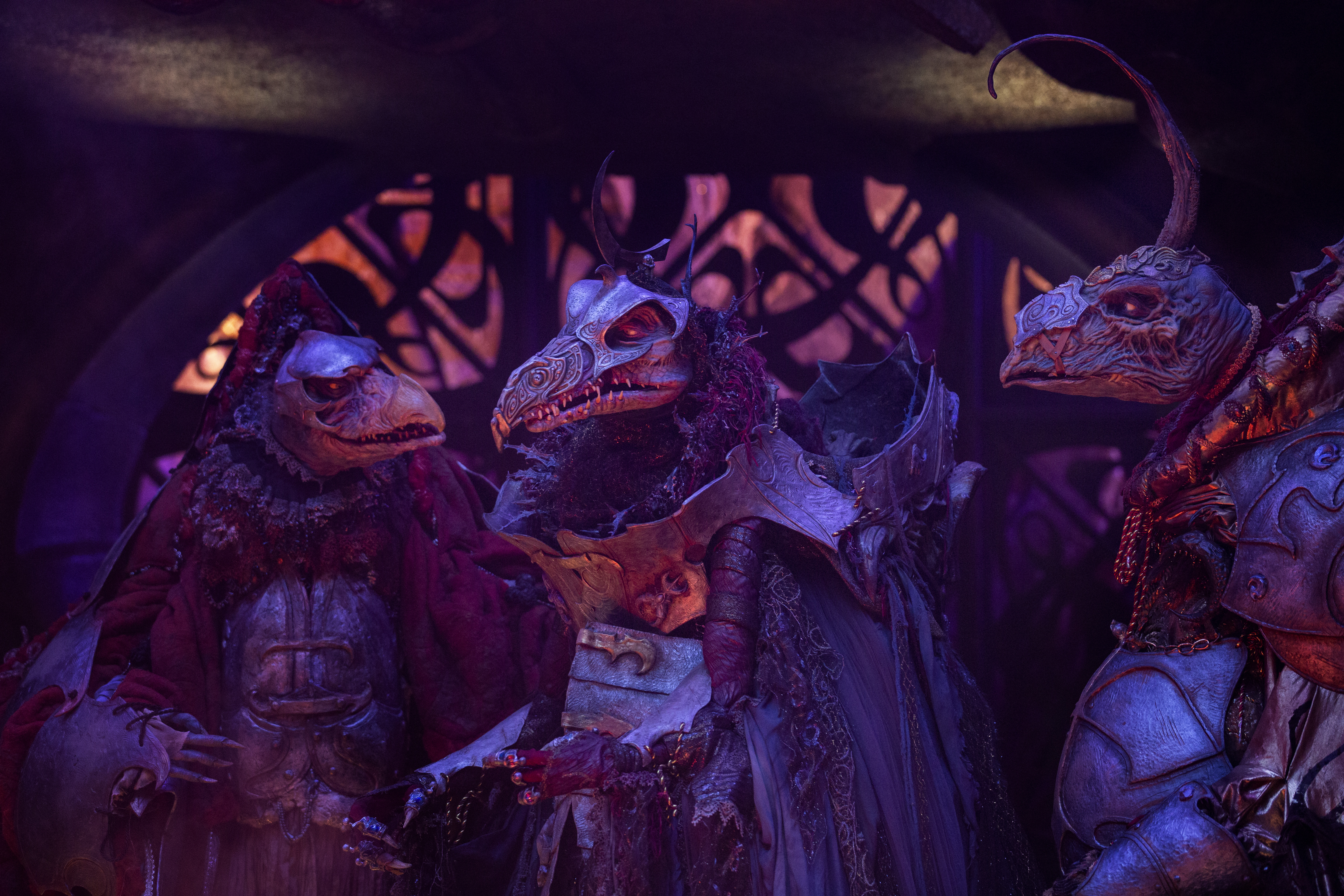 This vintage feel goes for its visuals too. There is something incredibly fascinating about the sheer amount of work put into Age of Resistance, building this whole world into a completely different medium of art. Audiences will be blown away by the wide shots of dark green landscapes and glowing purple skies to the intricate, arch-like build of the castles. It is hard not to pay attention to the little movements of the puppets that conveyed their different emotions and the etches of crevices in the Skeksis’s faces and their clanging, metal-like bodies. These puppets and designs are updated from the original movie — more defined — but true to its vision. Just like the original movie, there are strange moments where the upright puppetry is replaced by smoother, human motions and it is always jarring to see. However, this doesn’t happen too often. The fight scenes are creative and thrilling, with excellent work done by the puppeteers.

With designs led by Brian, Wendy, and Toby Froud it is astonishing to see these puppets and practical effects in action, as they are worthy enough to warrant a dedicated museum. It would be breathtaking to walk through these sets — no matter how terrifying those caves are sometimes, which encompasses The Dark Crystal: Age of Resistance tone — gloomy, dark, and scary but filled with enough passion to still be enraptured.

The Dark Crystal released on August 31st on Netflix. All ten episodes were provided for the review.

‘The Trial of the Chicago 7’ Review: Sorkin’s Courtroom Drama Searches for Order

‘Work It’ and the Self-Absorbed Legacy of Teen Dance Movies

‘The Haunting of Bly Manor’ Review: A Devastatingly Cathartic Exploration of Love and Memory