The idea of losing your best friend might seem like the end of the world, but for Starfish‘s leading lady it actually is. While mourning the loss of her closest friend Grace (Christina Masterson), Aubrey (Virginia Gardner) wakes to see her winter town in the midst of a—possibility metaphorical—apocalypse. The locals have been picked off by strange invading creatures, and soon Aubrey seems to be the last inhabitant left standing. After finding mysterious cassette tapes recorded by her late friend, Aubrey begins to try to piece together the strange occurrences and impossibilities, while trying to cope with the increasingly lonely apartment she’s held up in.

About a quarter of the way into Starfish, Aubrey screams out “What the fuck is going on!?” and I can’t put it any better. Starfish is wholly unpredictable, largely due to a confusing and incoherent narrative style. It favors brain-melting physics and disorienting editing over standard science-fiction fare from the word go, and has more in common with art house than it does with traditional film making. It’s undoubtedly intimate, falling heavily on Gardner’s young shoulders as she portrays the only fully-formed character. The film belongs to her, but the sole perspective doesn’t make anything easier to grasp onto. In sequences with quick shifts in location, time, and what appears to be a mental state, the consistency of the project becomes fluid and malleable, but for all the craftsmanship there’s a lot of wheel spinning without much traction. There’s a shortage of breadcrumbs left to help you get invested in the end of the world narrative, and it doesn’t quite mix with the loss Aubrey is going through. It seems the two were meant to cross, enveloping both themes into an existentialist point perhaps, but with so much left aloof it’s hard to engage with what is being attempted.

Aubrey is haunted by memories and nightmares of a traumatic event that is spliced throughout the run time, eventually allowing us into the pent-up feelings she harbours. Gardner’s performance is a distant one, fitting with the character’s environment and status as a survivor, but there’s a lack of real understanding that squanders the potential for a character that has viewers rooting for her wholeheartedly. It’s difficult to pinpoint exactly what the target was when it comes to Aubrey’s arc. By the end of the film, I understood that she missed Grace, but not much more than that. Starfish‘s thought provocation gets lost in these small pitfalls and nuances that don’t translate as well as they should. While soul-searching, personal, and space-influenced flicks such as Arrival or Melancholia manage to work around their abstractions to culminate a stirring experience, Starfish is missing a running thread to keep things focused and digestible. The last thing a complex film should be is boring.

I wonder if the world still exists if I choose to ignore it.

Despite the difficulty of fully coming to terms with the unexplained monsters and sense of time (or lack thereof), the bold creative choices are unique and interesting. Small physical clues in Aubrey’s surroundings help point to the fact all is not right, and asking yourself whether these small occurrences are down to larger forces or the mental strain Aubrey goes through is the most intriguing part of it all. The cinematography by Alberto Bañares and A.T. White’s wonderful string-based score are both instrumental in bringing the strangeness and vision of isolation to life, but unfortunately, substance and answers are slow to arrive. It’s not that there isn’t heart or a core here, it’s that they get tangled in the film’s web. While the idea of a friendship between two women being the most important part of a story is nice, the delivery seems short of a final kick to it bring it home.

Starfish might be too distant for its own good, but with some streamlining a journey like Aubrey’s could pack a serious punch. Whatever the result is for those watching, it’s clear White made the film he wanted to make, in all its subversive glory—which is commendable but of course divisive. 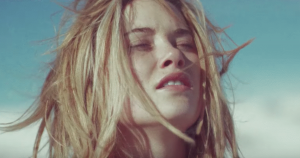 Starfish isn’t lacking out of the box choices, from the obscure structure of the story to the beautifully animated scene that comes out of the blue to interrupt the live action, but its reality-bending elements don’t appear to add up to much, leaving me cold to its point—whatever it may be. For those looking for brain-melting science fiction with a strong sense of identity, Starfish probably won’t live up to expectations.

The New Romantic: The Real Meaning Behind Digital Age Dating