When you take two actresses who recently made me sob with the strength of their performances (Margot Robbie in the court scene from I, Tonya and Saoirse Ronan in the moving call to her mother in Lady Bird), make them play opposite each other as two historical queens who have fascinated me since childhood, and put a female director at the helm of the project, it should add up to a movie I would fall completely in love with. However, Mary Queen of Scots is less than the sum of its parts, unable to recognize its obvious strengths and synthesize its individually interesting pieces into a cohesive whole.

Mary Queen of Scots follows the tenuous relationship between Queen Elizabeth I (Margot Robbie) in England and the titular Mary, Queen of Scots (Saoirse Ronan) in Scotland as they vie for power of the British Isles. With no heir apparent, Elizabeth is in a tenuous position as queen and Mary uses this weakness to insist that she, as her cousin, be named her heir, succeeding her as queen in the case of her death, effectively ending the Tudor claim to power for good and supplanting it with the Stewart line. The queens communicate via letters and political gestures disguised as gifts, showcasing the power plays the women must make to secure and weaken the other’s legacy. However, Mary begins to draw ire from the Scottish people and is perceived as an impetuous woman who threatens religion and the state. As a civil war breaks out in Scotland, plots to dethrone and kill her begin to emerge. With her personal safety threatened, she flees to England to seek sanctuary in Elizabeth’s realm.

Despite their opposition, the two queens are intrinsically linked by status and blood, and also by their unique situation. As Elizabeth notes in the film, they are the only two people in the world who understand the position of having political power as women in the 16th century. Although they are forced to be each other’s enemies, their commonalities seem to outweigh their differences.

The movie does not seem to know its own strengths—casting two interesting Actresses with a Capital “A” but rarely having them interact with one another in any meaningful way. Starting with Mary’s return to Scotland from France as a young widow to her eventual imprisonment in England, the film follows a linear narrative that separates Ronan and Robbie for the majority of the run time and ultimately makes the film suffer. 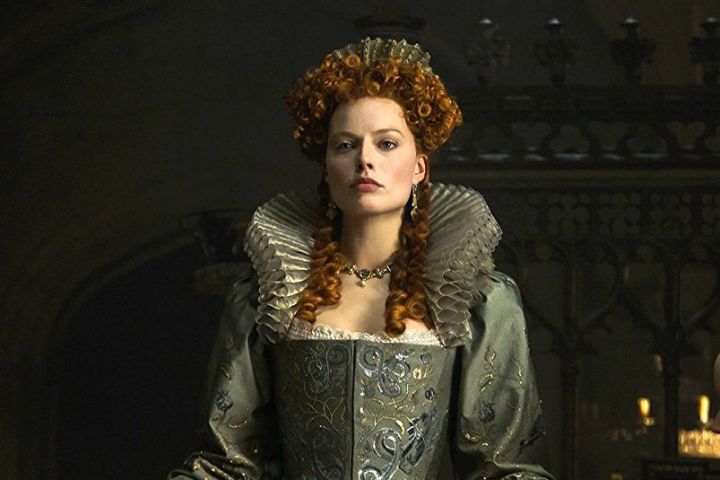 However, writing off the movie completely is impossible because when Elizabeth and Mary come face-to-face near the end of the film, it becomes electric, crackling with the pent-up energy of two powerhouse actors getting to act at one another, reminiscent of Katharine Hepburn and Peter O’Toole in A Lion in Winter. Robbie and Ronan are Capital-A Actresses, impressive in range and emotional depth. Their scene together is a seesaw of power transfer. Mary, on the run from those who would attempt to murder her in Scotland, is essentially powerless and has come to seek protection from Elizabeth in England. Even though she is completely helpless, begging for her life to her cousin, she acts as if she is still the heir apparent, the true queen, and that her murder at the hands of Elizabeth’s government would inspire fierce rebellion. Elizabeth, who is finally in complete control of Mary’s fate, weeps at their meeting as if powerless when she is in fact holding all the cards. It’s an incredible scene that deserves to be in a better film.

Mary Queen of Scots isn’t sure what movie it wants to be, so it tries desperately to be all of them. In doing so, it becomes tonally confused, derailing the narrative in favor of side stories and a frankly confusing revision of Mary in order to make her a more palatable, sympathetic character to modern viewers. It is a strange film, one that seems to have both too much story and yet not enough. There seems to be hints of several much more interesting movies throughout: a war movie with Mary leading an army, a court drama, a film of forbidden romance, a film of imprisonment, a commentary on the interconnectedness of religion, the state, and the crown, a film of female empowerment and the men who want to strip them of that power. If one of these themes received sole focus, perhaps Mary Queen of Scots would be the film I believed I would fall in love with when I first read about it. But as it stands, it just makes me wish there were more rewrites before they started shooting.

Mary Queen of Scots is out now in theaters.

To help us continue to create content, please consider supporting us on Patreon: https://www.patreon.com/filmera

Writer based in Atlanta, Georgia.

Foster Care and Social Development in ‘Birds of Prey’

Permission to Yearn: The Problem with the Popularity of White Lesbians in Period Films

‘Capone’ Review: Isolate With Al For Some Shallow, Deranged Fun