Ever since I watched Kogonada’s Columbus, I’ve been photographing beautiful buildings while I go on walks — three years and cities later, my phone is out of storage. Being the first film I saw at the IFC center, I remember the marquee quickly coming into view as I exited the subway. And later, as I was leaving this reverie of a film, I was left with a lasting clarity on small details of the city around me.

Columbus witnesses the meeting of Jin (John Cho) and Casey (Haley Lu Richardson) in the small town of Columbus, Indiana. Jin’s father, a famous architecture scholar, suddenly falls ill, and despite their estranged relationship, Jin travels from Seoul to be near him. Casey, a young woman from Columbus, works at the local library and helps to care for her mother. Smart and motivated, she has an encyclopedic knowledge of Columbus’ vast array of Modernist buildings. Although Jin doesn’t have much interest in architecture, he finds himself drawn to Casey as he tries to avoid spending time at the hospital. 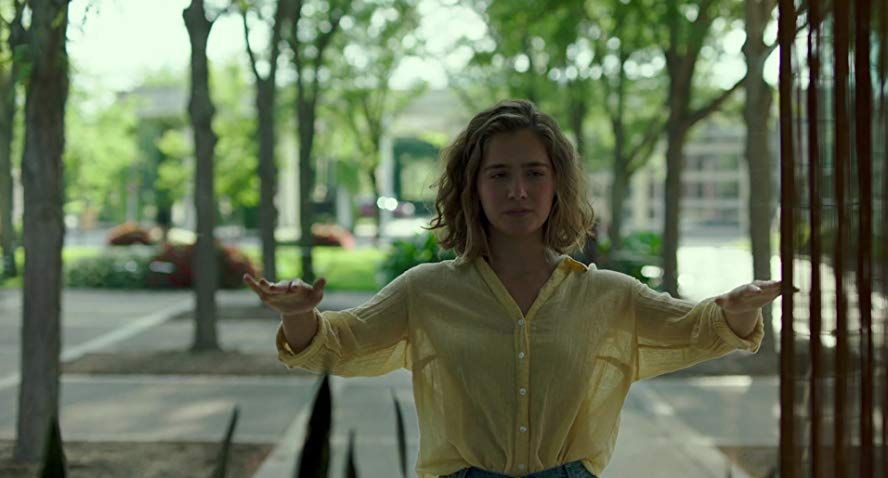 “Yes, yes, tell me about that. What moves you?”

Standing in front of Eero Saarinen’s Irwin Conference Center, Jin is put off by Casey’s uptight, tour-guide-style approach as they walk through the town — he wants to know why she loves the architecture, but she responds by firing facts at him. She finally admits that the building moves her, to which he enthusiastically awaits her response. In the following sequence, the viewer watches Casey from the other side of the glass wall. Her eyes light up as she looks forward, and we are unable to hear her as she gives her answer, recreating the building’s lines with her hands. The response isn’t important as we finally see Casey looking past the facts and into the passion. From this moment on, Jin and Casey’s time together is spent focusing on the feelings that architecture stirs in those who are willing to stop and look.

As much as Jin is avoiding the hospital, he is also searching for answers. Staying in the Inn at Irwin Gardens, he finds his father’s notebook filled with vague descriptions of buildings, and becomes determined to decipher them. In front of the Columbus Regional Health building, Jin flips the script, teaching Casey something for the first time. After skimming a book he found in his father’s room by the architect James Stewart Polshek (Polchek’s 2014 Build, Memory), Jin recalls, “…he had this idea, Polshek did, of architecture being this sort of healing art. That it had the power to restore and that architects should be responsible. All the details of this building are mindful of that responsibility, especially since it was a structure for mental health. This building was meant to be both a literal and metaphoric bridge.”

It’s the first building that Jin openly likes. Casey writes this all down in her notebook as the two share a tender moment within the slight role reversal. With Jin and Casey’s bodies aligning with different ends, it’s difficult to rewatch this scene and not feel, more than ever, the precariousness of the bridge between health and illness.

Among all the male architects with work erected in Columbus, Deborah Berke’s work speaks to Casey the most; it’s her First Financial Bank that Casey takes Jin to see — #3 on her list. Specifically, she wants to show him the glass structure, perpendicular to the main brick edifice, as it gently glows in the darkness of night. The two begin to have a more serious talk than usual, and Casey admits that this building is what started it all for her — she became fixated on it while her mother battled with addiction. She confesses, “I just saw it from over there. I’d probably seen it a thousand times before, but this one night, I was getting in my car and I looked up and saw it. So I jumped back in the car and drove up here, same spot, and I just stared at it for a really long time.”

Once Casey learned more about the architecture of her hometown, she started to see the magic in it. Similar to her first moment of vulnerability with Jin, Casey traces the lines of the building with her cigarette. When the world becomes too much — when words become too much — she returns to the glowing beacon of straight lines in search of comfort, but she never claims to be healed.

What is most powerful about Kogonada’s Ozu-inspired aesthetic of filmmaking is the gift he gives the audience: being able to take in each space without distraction. Columbus trains the viewer to look at buildings more closely, just like Casey teaches Jin. A skeptic at first, Jin is still working to understand the allure of architecture, mostly as a way of understanding his dying father. After struggling to interpret his father’s simple line drawings, Jin and Casey are sitting in front of the Columbus City Hall, designed by Edward Bassett, which has two brick structures that run parallel but never meet. In a small moment of clarity, Jin steps back and looks up, as one can imagine his father might have, and feels confident that this is what his dad drew in his notebook — at least, that’s what Jin is going to tell himself. As ordinary as this moment seems, it embodies Kogonada’s desire for all of us to look up at both the positive and negative space. Once Jin looks up and sees what his father saw, he feels a bit closer to him. Like Casey, he is not healed, but he is on the way.

In the following scene, Jin and Casey walk around Eero Saarinen’s Miller House and Garden. The opening sequence of Columbus shows Jin’s father wandering through the same home as his assistant, Eleanor (Parker Posey), tries to find him; Jin and Casey take the same route. Jin looks out at the garden, in the same spot as his father did, while Casey searches the home for him. Jin and his father are alike after all, moving almost identically through space — it’s as if Jin adopted his father’s eye after working to understand it. When he first meets Casey, Jin quips, “You grow up around something and it feels like nothing.” For Casey, that “nothing” became something once she started to immerse herself in Columbus’ architectural history. For Jin, he feels closer to his estranged father after he takes the time to understand a part of him.

Watching the film myself, my sense of space changes: a dreamlike calm washes over me as the stillness of this small town stops the movement of New York City, if only for a few hours. Typically, I leave films with my head down, deep in thought, watching one foot step in front of the other. After watching Columbus, I looked up: I noticed the slanted ceiling, and I saw the triangular shadow the marquee casts on the sidewalk. I revisit this film often. For me, it serves as a gentle reminder of how to slow down and take time to look closely at your surroundings, because like Casey, maybe one day you’ll find a bright beacon of light off the side of the road. After Columbus, I move through the city differently. I look up and often remind myself of all the space that exists outside my own head, finding a fraction of healing in each beautifully straight line.

‘Scream 3’ at 20: An Underrated Finale to the Trilogy