“If I don’t draw for a while I get really crazy. I start feeling really depressed, suicidal. But sometimes when I’m drawing I feel suicidal too.”

It’s a tragic truth that troubled minds often yield the most incredible wonders. These broken souls adapt to survive in spectacular ways, finding new means to channel their pain and suffering. The results can make them seem valiantly heroic or dreadfully insane. Consider the life of artist Robert Crumb, known for his sexually provocative, darkly comedic panels of the 1960’s counterculture depicting popular Americana with unforgiving, acid-bent satire. He created an underground series called Zap Comix, produced acclaimed cartoon strips like Mr. Natural, Fritz the Cat, and Keep on Truckin‘, and even designed the cover art for Janis Joplin’s “Cheap Thrills” album. He also constantly battled to retain his sanity, damaged by a slew of horrific childhood traumas. Art was undoubtedly a form of therapy that rescued Crumb from a miserable fate. 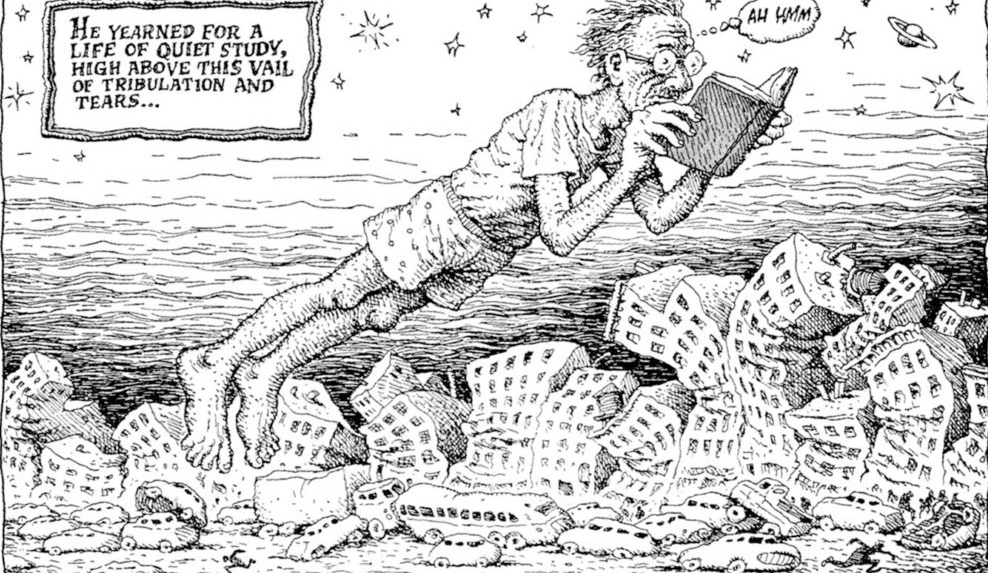 Directed by the artist’s longtime friend Terry Zwigoff, the story mainly observes his familial relationships, primarily concerning his brothers Max and Charles, along with glimpses of their dangerously aloof parents. Photographs of their past are masked by a seemingly normal façade that works hard to conceal the family’s grim secrets. Zwigoff’s terrifically complicated film careens between different periods of Crumb’s life, from the West coast to the East, from biography to analysis, from art to humanity. It unravels logically with a malleable, subjective mode of storytelling that jukes and jumps without ever derailing the endearing narrative. He slowly dissects the lives of his unusual subjects with patient, sincere empathy.

Crumb is an unforgettable documentary and one of the strangest, most haunting films ever made. There are many allusions to his dysfunctional upbringing, captained by a merciless tyrant of a father known to beat his children and belittle them whenever the opportunity arose. The film also touches on the neurotic, unhinged presence of his mother and her debilitating addiction to amphetamines. Stories like these are difficult to capture. Some people shudder at the thought of revealing intimate details of their lives to familiar faces, let alone a stranger with a camera. Zwigoff was lucky to know Crumb so closely. The exploration of his friend’s vices served as a vessel of reflection for the director and helped quell his own personal struggles with mental health.

Though his two sisters refused to cooperate with the making of the film, Crumb’s brothers bravely profess wounded memories of adolescence and examine the ways it shaped their bizarre adult lives. Their accounts leave us in disbelief, told in correlation with that of their world-famous sibling, who was fortunate enough to convert his madness into something profitable. Max Crumb ended up a beggar on the streets of San Francisco, but before that he became a monk of sorts, passing his days painting skillful abstract visions all while chugging through life with odd practices like sleeping on a bed of nails and swallowing linen ribbons to cleanse his intestines. Charles, the eldest brother, never broke away from the turmoil of his youth. He retreated from the world, seeking refuge in his cluttered upstairs bedroom. There he would remain for the rest of his life, surrounded by mountainous piles of books, a lonely recluse with his kooky mother as a downstairs roommate.

In their younger years, the Crumb brothers escaped their tumultuous home life by delving into elaborate artistic fantasies. Charles began drawing comics, and Robert followed. They created a world where their sexual desires ran free, establishing strong, carnal fixations on fictional characters like Bugs Bunny and Long John Silver. Crumb’s later drawings never lost this eccentric quality. He used art to punish those who were cruel to him in the past and often displayed his weird fetishes for women with gigantic asses giving piggyback rides to scrawny, wide-eyed men. Zwigoff doesn’t cheat the audience when it comes to the social and moral issues that live within Crumb’s work, opting to provide perspectives from all sides. Robert Hughes, art critic for Time magazine during the film’s production, praised Crumb as a triumphant virtuoso. Deirdre English, former editor of Mother Jones magazine, called his art pornographic and “an arrested juvenile vision.”

Zwigoff’s documentary is a beautifully uneven look at the man and artist known as R. Crumb. The film’s patient editing blends a selective arsenal of drawings with snapshots of the past and grainy frames of the present, accompanied by the obscure, old-timey music he so faithfully adored. There are instances where his art can appear offensive and disturbing, including moments of violent sexism and certain spats of racism claimed to be intended as satire. The film seems to argue that Crumb has earned the right to express himself simply because art is a coping mechanism that has allowed him to confront his inner demons. Still, it doesn’t take sides or attempt to justify his content. It simply gives Crumb a chance to conceptualize out loud, allowing his voice to be heard through something other than comic books.

Much bleaker implications are hidden throughout film, discreetly creeping along the two-hour runtime. Robert’s conversations with his brothers are riddled with tiny fits of nervous laughter. Sometimes they chuckle out of confusion, out of guilt or surprise. We begin to understand that although Robert found some shade of peace, Charles never truly healed. He committed suicide not long after appearing in the film. The final cut is dedicated to his memory.

Films like Crumb burrow into our minds and stay there forever. Multiple viewings always generate new questions that never lead to concrete answers. The mightiest giants of cinema operate this way. They constrict us like an addiction, demanding we return time and time again as if the next visit might finally expose the true cause of our obsession. In the end, it’s the people we see through the lens that call us back. We can’t help but try to learn more about them, because these efforts help us to learn more about ourselves. There is much to be absorbed from the history of the Crumb clan, and Zwigoff’s masterpiece gives fresh air to their otherwise suffocated story. Crumb tells the tale of a peculiar hero, his maniacal family, and the courageous, yet depraved methods that ultimately saved his life.

If you or someone you know is considering suicide, please seek help right away. Call the toll-free, 24-hour National Suicide Prevention Lifeline at 1-800-273-8255 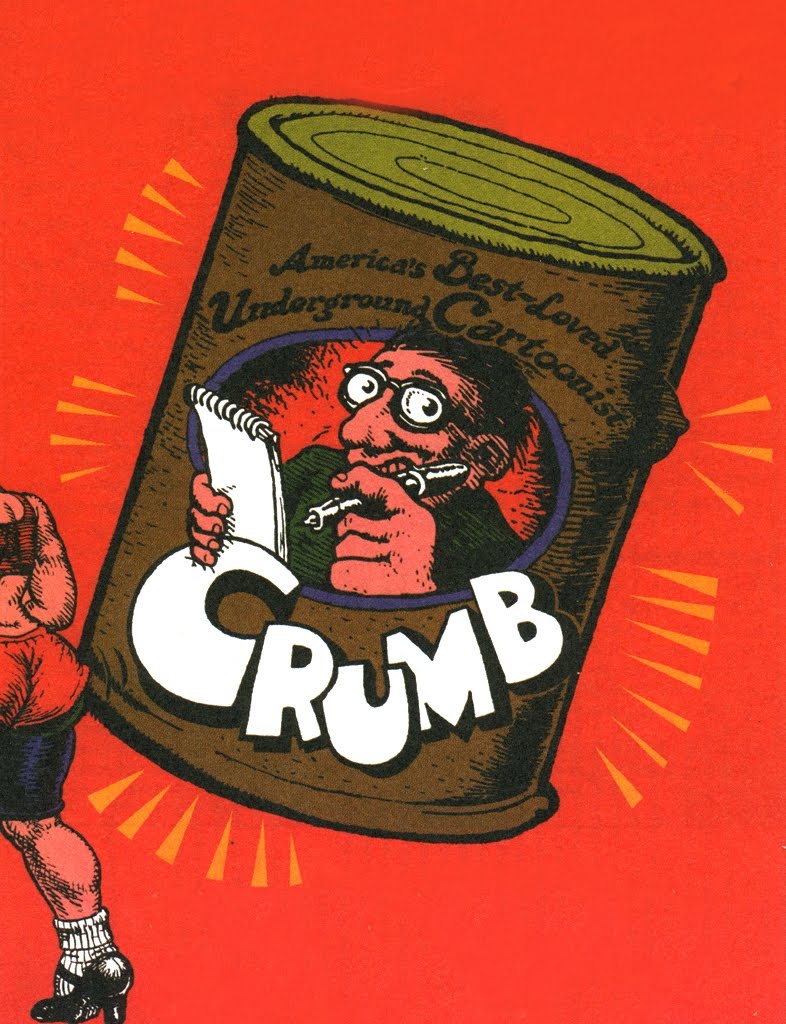 LFF 2020: ‘One Man and His Shoes’ Review: A Soaring, Searing Tale of Soft Power

CIFF 2020 Dispatch: ‘Kubrick by Kubrick’ and ‘City So Real’ Reviews

NYFF 2020: ‘Muhammad Ali: The Greatest’ Review: Exhilarating and Clever as The Man Himself