When done right, the exploration of the damaged male psyche is an inviting device for filmmakers. Scorsese uses it well within Taxi Driver (and frankly, the bulk of his filmography), and Mary Harron’s American Psycho offers up a fresh and satirical deep-dive into the late 20th-century businessman. But there is no finer example than Stanley Kubrick’s A Clockwork Orange, and its protagonist, Alex Delarge.

Since Joker’s release back in October, Todd Phillips has been hounded for his blatant Scorsese-isms – his dry attempts to capture the energy permeating from films like Taxi Driver and The King of Comedy. But what has yet to be asserted is Phillips’ strides at attaining Kubrick’s successful exploration of the broken man. While potentially farfetched, there are comparisons to be made as far as intent goes. Both films center on violent men corrupted by their surroundings, and each puts forth forceful political implications. But where A Clockwork Orange soars, Joker fumbles. To put it plainly, Joker is a shallow attempt at divulging male interiority.

There is something to be said for satirizing loathsome men within films. Through the depiction of characters whose wrongdoings are ultimately praised, viewers are able to take away commentary on how violent men act, as well as how easily society is able to find humanity within their crimes. Kubrick does this especially well, while Phillips makes little to no attempt whatsoever. In A Clockwork Orange, viewers are faced with an unapologetically repulsive man. The first shot of the film is Alex staring at the camera with a villainous smirk on his face, preceding his sexual violence against women. Viewers are never made to feel as though his character has redemptive qualities. Instead, the real conflict arises from Alex being experimented on and tortured by the government as a consequence of his crimes.

Without actually forcing sympathy upon his protagonist, Kubrick is able to question viewers’ morals. Joker, on the other hand, wants us to love Arthur despite his atrocities. Nearly every scene attempts to manipulate the audience into empathizing with the villain; from Arthur losing his job, to him being mocked by Murray Franklin, there is little room to deem his actions deplorable. Instead, they are made to feel like valid reactions to Gotham’s sociopolitical climate.

I’ll admit that contextually, A Clockwork Orange has a leg-up. Its source material centers on the deep exploration of Delarge, leaving the lines between villain and victim blurred. Joker is not granted this same creative liberty, as he cannot escape the confines of being Batman’s villain. His mere existence implies the existence of a greater power: the brooding hero, the one who is allowed to be complex and defines the male psyche. So to step away from that canon and explore a new psychological avenue is bold, no matter the outcome.

When watching films that analyze male psychology, viewers should not feel lectured about the “breaking point” of these vile men. Suppressed anger, coupled with an unsympathetic environment, that leads them to commit heinous crimes is tired trope that suspends any accountability these men may face. This is where Joker crashes and burns – it’s a film about the birth of the villain as a result of the death of a man. In separating Arthur from Joker, the film lets Arthur off the hook. Joker becomes a symbol for lower class frustration, whereas in A Clockwork Orange, Alex is simply a man who reflects the corruption he coexists with. 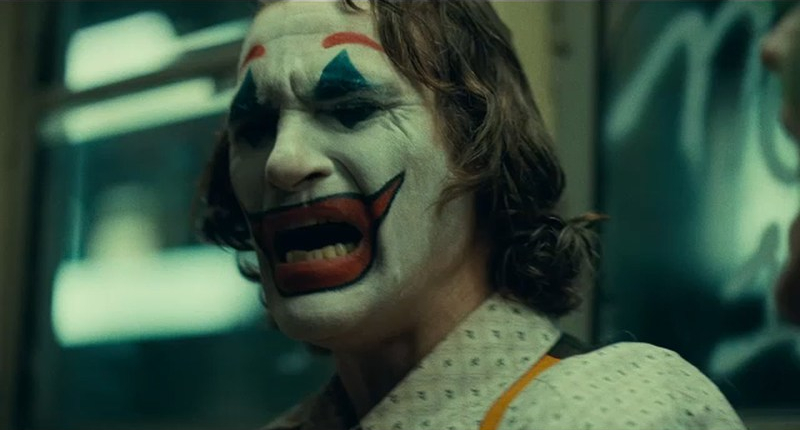 Evidently, there is a senselessness to the violence in both films, but A Clockwork Orange seamlessly weaves in relevant social commentary alongside these sequences. Alex rapes women and assaults strangers on a whim. It’s sporadic, yet almost ritualistic. This randomness is the deadliest part of his character. There is an entitlement to Alex’s violence – a belief that he possesses a right to the bodies around him. And while, in the most technical sense, the government condemned these actions, Alex emerges from the experience scathed but unchanged and forgiven. If anything, Joker seems to actually assert the claim that men are violent by nature, they just need to feel broken down by their surroundings before they can give way to their brutal, animalistic instincts. Kubrick instead holds these men accountable, as he showcases that Alex’s actions are deliberate. The violence, while fostered by these societies, is simply a product of individual choice.

While Kubrick is rather on the nose with his politics surrounding mental health, it feels natural within the setting that he fleshes out: a morally ambiguous world that tortures Delarge for his violent past, thus feeding into an irreparable system of brutality. That is how you properly illustrate the society vs. the people trope. It is clear that Phillips wanted Joker to push this same narrative, but his intentions were strangulated by his own lazy writing. Perhaps the most obtuse line to emerge from an already unforgivably bad screenplay is Fleck’s “What do you get when you mix a mentally ill loner with a society that abandons him and treats him like trash?” A film harboring this subject matter should never have to explicitly say anything to this effect. The mark of any great villain is their ability to evoke understanding about how they came to be this way. In A Clockwork Orange, we can effectively question the corrupt governance without perceiving Alex as a victim, while in the former, Arthur is tethered to the political sphere around him, thus equating our discontent with the film’s politics with Arthur’s decision to rebel against them.

Where Joker projects skewed male interiority, A Clockwork Orange invites its audience to dissect a flawed protagonist. Even at its most provocative moments, Joker is unable to convey its own message. Phillips detrimentally isolates Arthur from his own humanity in a way that feels disingenuous to the source material. Conversely, Kubrick is able to expose the societal repercussions of the damaged, violent man in a way that invokes discussion surrounding political deceit and unethical punitive measures. In begging for empathy and clawing at discussion, Joker is a shallow attempt at emulating Kubrick’s exploration of the male psyche. This is why, nearly fifty years later, A Clockwork Orange remains just as relevant as the year it was released.

To help us continue to create content, please consider supporting us on Kofi.